The territory of the Township was partly included in a tribunal reservation on which the Potawatomies lived during the later years of their residence in Berrien County.  The first cession of land that affected this part of Berrien County occurred on Sept. 20, 1828, which embraced the land lying west of the St. Joseph River, except the reservation.  The greater part of Buchanan Township is in the tract ceded in 1828, but the village is in the reservation.  This ceded in 1838.  The best land in the last cession was chosen by the Commissioners as seminary land, and most along McCoy Creek.  The land was largely settled by those who intended to purchase the land, however, when a price of $20.00 an acre was put on the land they were compelled to give it up.  Later the price was reduced to $12, later to $6.

The town derived its name from James Buchanan, the 15th President of the United States (1857-1861).  At the time the Townsip was organized there were about 27 families.  The Act that officially created the Township (approved March 11, 1837) provided “all that portion of the County of Berrien be so much of the Township seven South of range eighteen west, as lies west of the St. Joseph River by, and the same hereby, set off and organized into a separate township by the name of Buchanan”. 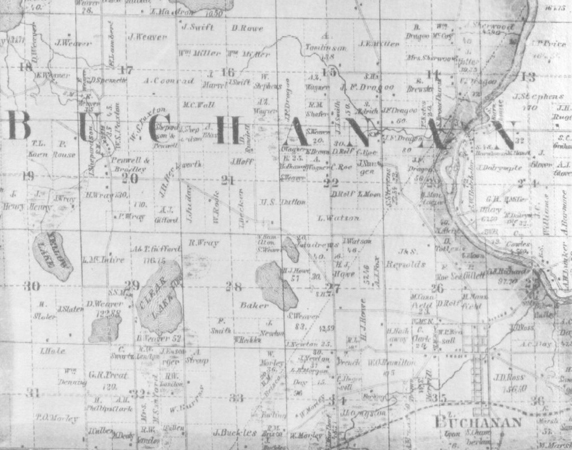 Meetings of the Township Board were held in homes.  Elections were held in the Wagner Grange Hall. In 1941 the Board voted to buy a fire truck.  An agreement was made between the City and the Township that the Township would furnish a fire truck and it would be stationed at and manned by the City.  In 1943, a chassis and a general pumper were bought, and in 1949 a new truck was purchased.

In 20 00 a new fire station was built, and in 2002 the Township offices were remodeled and expanded into the old fire bays at a cost of $148,875 with no increase in taxes.